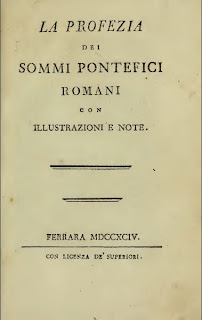 For more than 800 hundred years scholars have pointed to the dark augury having to do with "the last Pope." The prophecy, taken from St. Malachy's "Prophecy of the Popes," is among a list of verses predicting each of the Roman Catholic popes from Pope Celestine II to the final pope, "Peter the Roman," whose reign would end in the destruction of Rome. First published in 1595, the prophecies were attributed to St. Malachy by a Benedictine historian named Arnold de Wyon, who recorded them in his book, Lignum Vitæ.
Tradition holds that Malachy had been called to Rome by Pope Innocent II, and while there, he experienced the vision of the future popes, including the last one, which he wrote down in a series of cryptic phrases. According to the prophecy, the next pope (following Benedict XVI) is the final pontiff, Petrus Romanus or Peter the Roman.
The idea by some Catholics that the next pope on St. Malachy's list heralds the beginning of "great apostasy" followed by "great tribulation" sets the stage for the imminent unfolding of apocalyptic events, something many non-Catholics agree with. This will give rise to the false prophet, who according to the book of Revelation leads the world's religious communities into embracing a political leader known as Antichrist.
Throughout history, many Catholic priests—some deceased now—have been surprisingly outspoken on what they have seen as this inevitable danger rising from within the ranks of Catholicism as a result of secret satanic "Illuminati-Masonic" influences. These priests claim secret knowledge of an multinational power elite and occult hierarchy operating behind supranatural and global political machinations. Among this secret society are sinister false Catholic infiltrators who understand that, as the Roman Catholic Church represents one-sixth of the world's population and over half of all Christians, it is indispensable for controlling future global elements in matters of church and state and the fulfillment of a diabolical plan called "Alta Vendita," which assumes control of the papacy and helps the False Prophet deceive the world's faithful (including Catholics) into worshipping Antichrist.
As stated by Dr. Michael Lake on the front cover of this unprecedented report, Catholic and evangelical scholars have dreaded this moment for centuries. Unfortunately - as you will discover in the next 90 days - time for avoiding Peter the Roman just ran out.
PETRUS ROMANUS: THE FINAL POPE IS HERE: REVEALS FOR THE FIRST TIME...
* 2012 and the end of the Prophecy of the Popes -- behold Petrus Romanus.
* Revealed! The secret French codex written by a Jesuit Mathematician over 60 years ago that determined his arrival in the year 2012.
* Found! The ancient mysterious 'lost book' that John Hogue (The Last Pope) said was gone forever.
* What Jonathan Edwards (America's most important and original philosophical theologian and greatest intellectual) believed about the year 2012 and the coming of the False Prophet and Antichrist.
* The bizarre occult connection to the assassination of Father Edward Kunz.
* From Manning to Malachi -- Catholic seers who warned of his coming... and died under mysterious circumstances.
* The secret of Malachi Martin and Rosemary's (Petrus) Baby.
* A Cryptic 2012 Poem: When the Pope walks over dead bodies of priests... the Woman prepares to ride the Beast!
* The fourth secret of Fatima and other suppressed Marian texts.
* Evangelical Dominionists and their energetic role in paving the way for his coming.
* Uncanny mystics and the Keepers of the Hidden Knowledge
* The New-Old Order of the Quest and 'X' Marks the Spot: Find the Head and the Body will follow!
* From the very beginning: Seances in the White House?
* Other Ancient 2012 'Strange Attractors' - Maya, Aztec, Zohar, Hindu, Catholic, Masonic, Rosicrucian, American Indian and many more.
* The openly hidden secret in the US Capitol tying the U.S. and Vatican to Mesoamerican 2012 and the coming of The Dragon.
* The secret occult hand guiding America and the Vatican into the year 2012.
* Get ready: Will it be black... white... or blood red smoke?
http://www.ProphecyOfThePopes.com
Publié par Isabelle à 17:13